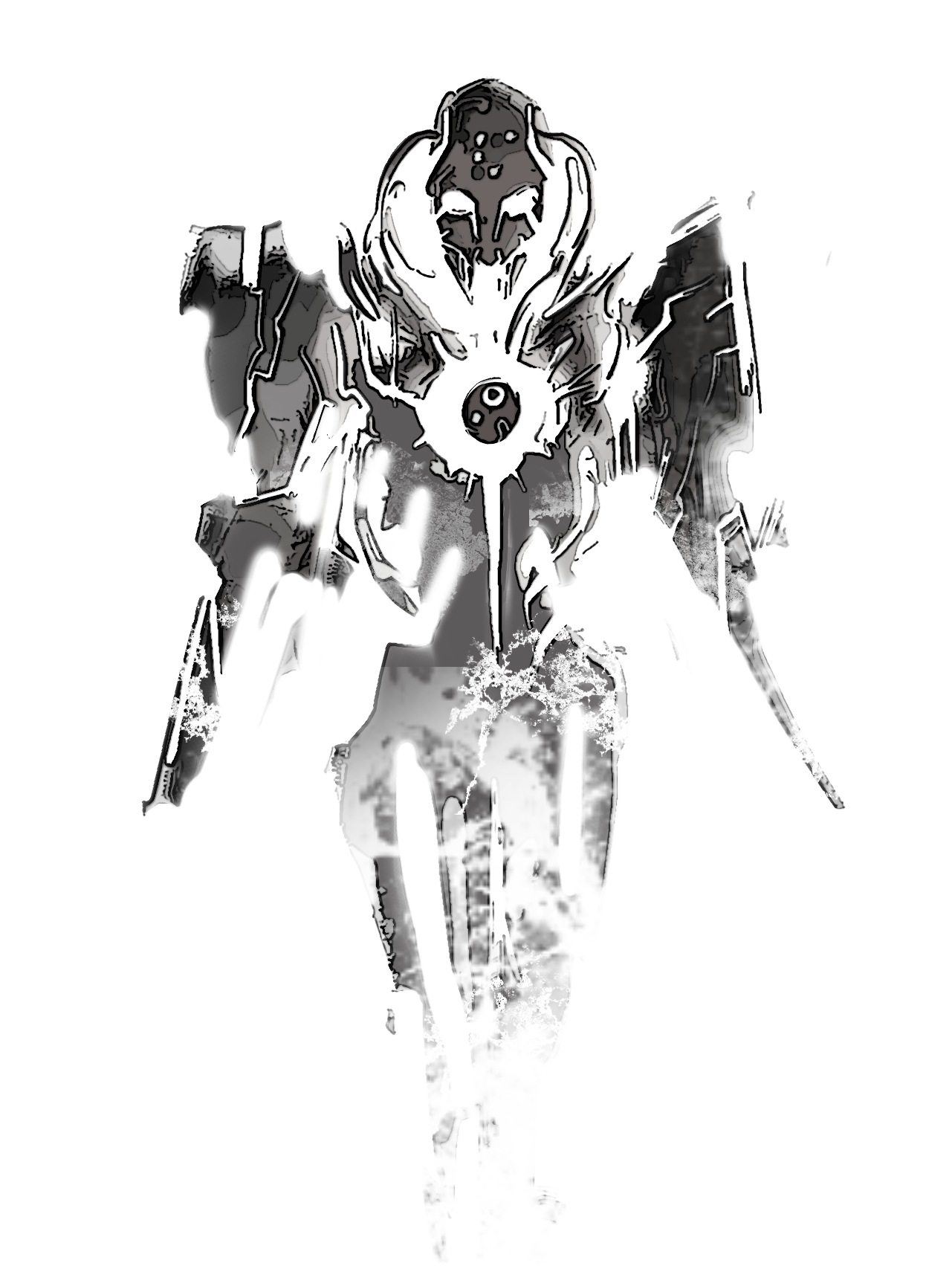 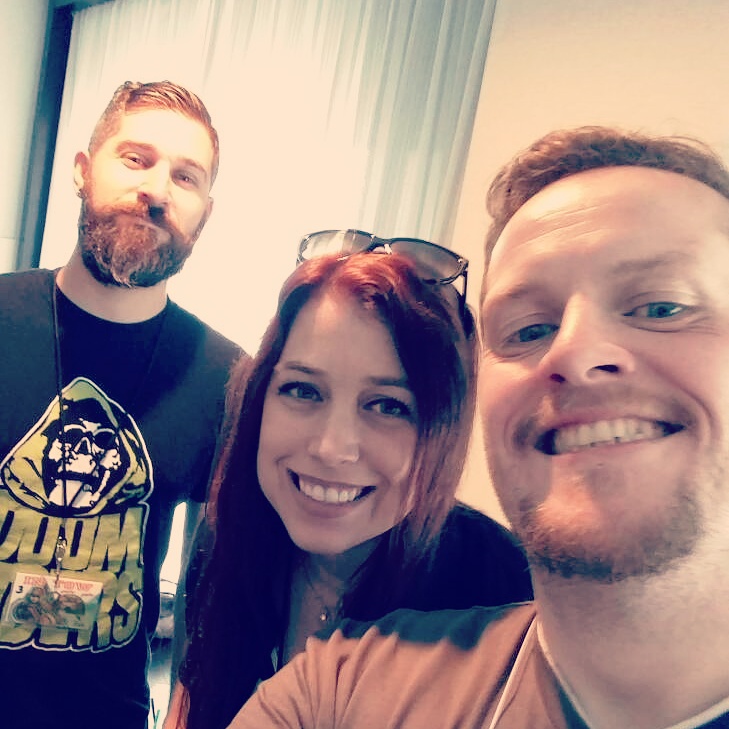 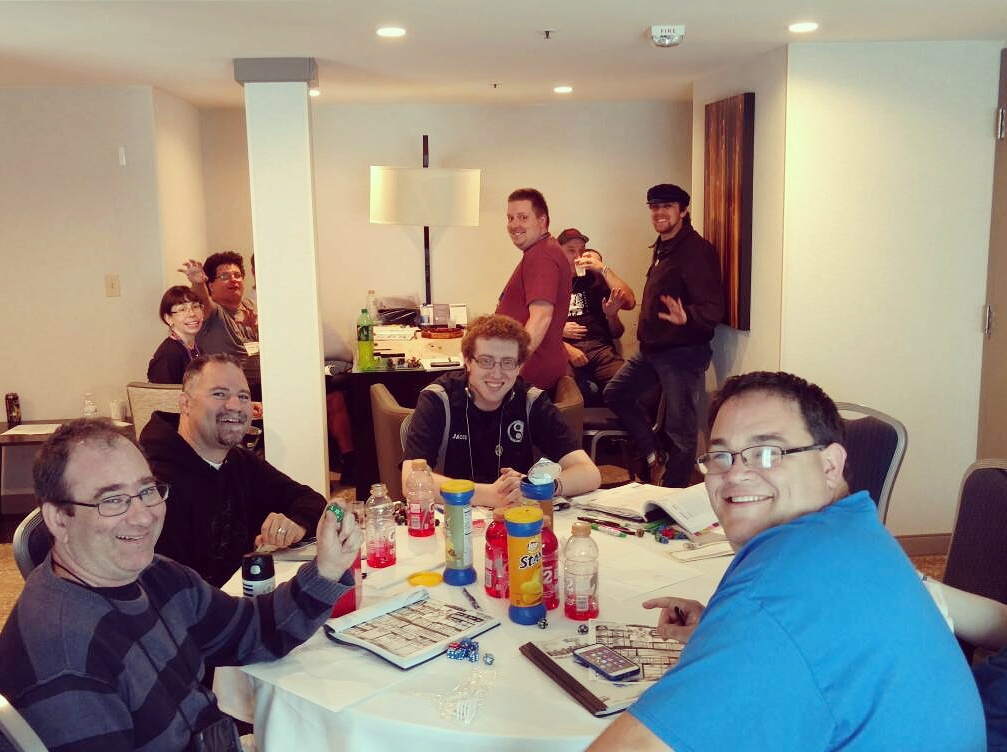 If the pictures to the left did not give it away, KublaCon 2016 was an absolute blast!

Project Biomodus was run in four different gaming sessions, with a whole host of new and old players. The feedback, ideas, players and feel of those sessions was overwhelmingly positive. It was both a humbling and uplifting feeling to have so many people come to the game, only to return (in some cases for all four sessions) and on top of that, to have so many drop-ins from people who just wanted to learn about the system or had enjoyed the setting and artwork.

I want to give a very special thank-you to Charles, who although only having played a game of Project Biomodus the night before, took on  the mantle of Narrator and ran a game for the several drop-ins that I would have otherwise had to have turned away. I can foresee that we are going to be seeing a lot more of Charles (and his work) about in the future!

I also want to thank Melina and Mike from the team for coming by. Mike managed to get some awesome footage of the gaming sessions along with some photos, and those will be used in the Kickstarter video that should be coming up by mid-Q3 of 2016.

So What Did We Learn?

There was some excellent system feedback, and a few outstanding balancing issues that need to be addressed before anything else, but it seems that many of the questions stemmed from the setting, biology and more in regards to how a person would run a game of Project Biomodus. Over the next few weeks, we will be retooling the Playtest and sending out links to everyone who wanted to be kept updated for them to look at.

Some examples of things I need to clarify in the playtest:

There is plenty more that needs to be addressed in the Playtest, and over the next coming weeks, a new document will be drawn up, sent to the wonderful players at KublaCon and more feedback gathered before we finally head to the Kickstarter.

KublaCon was a validation that our concepts and system ideas worked and that people enjoyed them. It is impossibly gratifying – not only as the Creative Director of Project Biomodus – but as a Narrator to have such inventive players; people with an excellent sense of humor and creativity enjoying your game.

Thank you to all of my players, the KublaCon volunteers and organizers, as well as the staff at the Hyatt Regency SFO Hotel for giving this Narrator the most rewarding RPG experience of his life thus far!

Aside from the changes to the playtest listed above, I will be sending out an email to each of the people who gave me their contact details. I will also be putting the Discord server into production (with the capabilities of running online playtests included,) as well as put together a survey for people to give me a bit more detailed feedback from the aftermath.

In the longer term, I expect that I will be vetting the new playtest for a couple of months in an effort to tighten it up. As of that point, we will be ready to go to Kickstarter. The original goal was to aim for a July campaign, however there is some timing collisions with another convention I will be attending early in the month. Once that is done, the final preparations will be put together for a (tentatively) scheduled mid-Q3 campaign.

When that gets going… well, that’s when the real work begins!

Thank you again to all our KublaCon players!